Glenwood Valley Farms is an established greenhouse vegetable grower. Its 14.5-acre greenhouse produces long English cucumbers, miniature cucumbers, eggplant, tomatoes and a variety of chilies. The company wanted to see if LED-to-plant lighting could improve the quality and yield of mini cucumber plants. 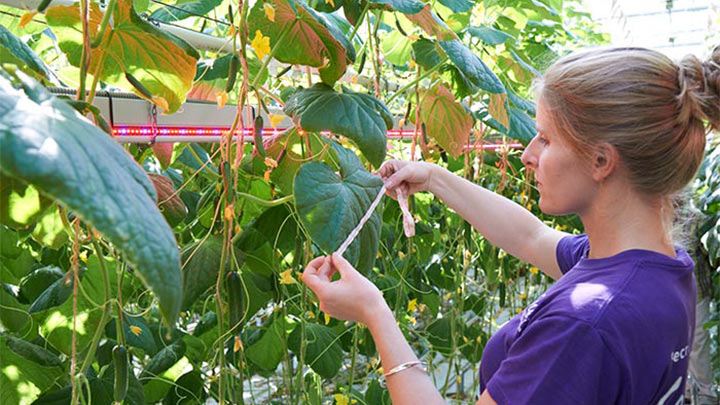 The experiment consisted of four rows of 16 GreenPower interplant lighting modules, which were used in conjunction with an existing HPS system. These lamps are placed to provide light between the plants. Previous experiments using cucumbers and tomatoes have shown that this layout helps the plants produce more fruit.

To fully test the LEDs, one group of crops was given these lights, while a control group was given only HPS and daylight lighting. The test was carried out for two production cycles. The LEDs installed have an optimized spectrum designed to keep the leaves active.

The experiment was a success. Adding just 8 percent extra lighting increased average production by 19 percent. This shows that LED light can be absorbed very efficiently. Significant improvements can be seen in crops, with fruits ripening faster and darker in color. Significant changes can also be seen in leaf size and distribution. Overall, the experiment showed that LED light could be converted into sucrose more efficiently, thereby promoting plant growth.

Tests using the hybrid system have shown an increase in plant yields as a result of being able to absorb light more efficiently. This gives farmers better planting conditions in the winter and more control over their crops in the summer.